Goforth scores on suicide squeeze in bottom of 6th to win

The Blacksburg O-Zone team beat Bedford 7-6 in dramatic fashion on Saturday night.  If there was such a thing as "ESPN Classic Youth Baseball Games", this one would certainly qualify.  In a game filled with back and forth drama, the Bruins would preserve the win when Ethan Goforth scored on a suicide squeeze with two outs in the last inning.  Precise "small ball", timely hitting, and solid pitching from Ethan Goforth propelled Blacksburg to the win, and into the championship of the winner's bracket.

After holding Beford scoreless in the top of the 1st inning, the Bruin bats got going quickly again tonight, scoring two runs to jump out to a 2-0 lead.  Ethan Goforth led off with a double, then stole 3rd, and a RBI sacrifice by Jacob Nottingham scored Goforth for the game's first run.  Bryce Nicolau then walked, followed by a Adam Linkous single, and Jack Madigan hit a sacrifice fly to score Nicolau to make the score 2-0.

Neither team scored in the second inning.  Hal Hughes reached on a single, but was left stranded.

After holding Bedford scoreless in the 3rd, Blacksburg added three runs to increase their lead to 5-0.  Seb Cianelli and Nottingham both reached base with successful bunts, and Cianelli would score on a throwing error by Bedford. Nottingham then stole 3rd and Nicolau hit a deep fly sacrifice to score Notthingham.  After a Adam Linkous walk, Jack Madigan bunted safely to put runners at 1st and 2nd.  A double steal by both advanced runners one base so that Linkous was in position to score on a passed ball for the 3rd run of the inning.

In the top of the 4th inning, Blacksburg was able to withstand a grand slam by Bedford to pull within one run 5-4.  The Bruins quickly responded scoring a run of their own in the bottom half of the inning.  Hughes walked, Andrew Roberson doubled, and Grayson Shelton hit a RBI sacrifice fly to score Hughes.   Blacksburg would lead after four innings 6-4.

Bedford notched another run in the 5th to pull within one run, 6-5.

In the top of the 6th and down by one run, Bedford had runners on 2nd and 3rd and no outs.  A deep fly ball was hit to right field and the runner at 3rd tagged to score the apparent tying run of the game.  Blacksburg would appeal, however, and upon throwing to 3rd base, the runner was called out for leaving early.  With two quick outs, and one runner on, Bedford would rally to load the bases.  On a dramatic called third strike to end the game and subsequent Bruin celebration, a balk was called by the field umpire, sending the runner at third home to tie the game at 6-6.  On the next pitch, Adam Linkous struck out the batter for the second time to end the top half of the inning.

In the bottom of the 6th with two outs, Ethan Goforth was hit by a pitch. Goforth moved himself around the bases by stealing second and advancing to third on a passed ball.  With two outs and Jacob Nottingham at the plate, Head Coach Mike Goforth called for the suicide squeeze.  Nottingham responded by laying down a perfect bunt just inside the third base line.  Going home as the pitcher started his windup, Goforth crossed home plate before the pitcher even fielded the ball, and Nottingham beat the throw to first to end the game in dramatic fashion.

Ethan Goforth was the wining pitcher, going five innings for Blacksburg, scattering eight hits with five Ks.  Adam Linkous pitched the sixth for Blacksburg and recorded the save.

Offensively, Blacksburg was led by Jacob Nottingham who went 2/4 with two RBIs.  Ethan Goforth and Andrew Roberson each had a double, with Goforth scoring two runs.  Adam Linkous, Jack Madigan, Jake Verniel, Hal Hughes, and Seb Cianelli all had one hit each.

Blacksburg advances to the championship of the winners bracket and faces Rustburg on Sunday @ 7pm. 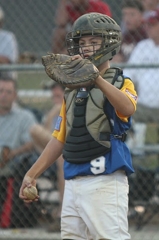 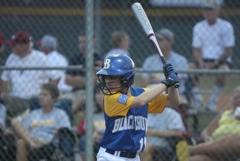 Jake Verniel at the plate 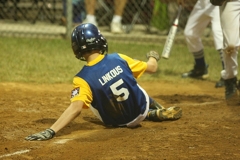 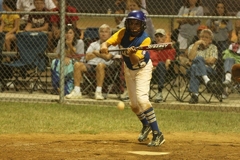 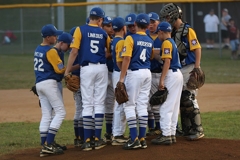 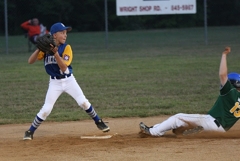 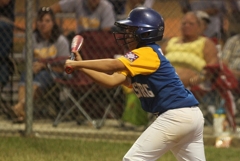 "Small ball" was the theme of the night 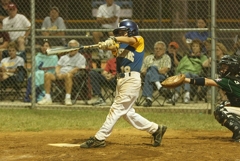 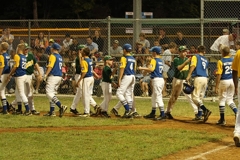 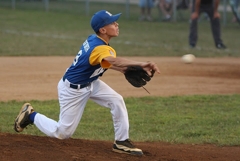 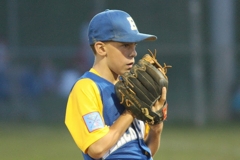 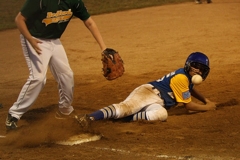 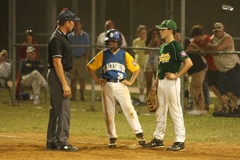 A meeting at 3rd base