Blacksburg jumped out to a 1-0 lead in the top of the first.  After a Jacob Nottingham walk, Bryce Nicolau had the first of what would be four hits, a RBI single, that would score Nottingham.

Montgomery County picked up three runs in the 2nd inning to take the lead 3-1.

In the 3rd inning, the Bruins sent ten batters to the plate and responded with six runs to re-take the lead 7-3.  The inning was highlighted by Hal Hughes two RBI single, Jake Verniel's double, and a RBI triple by Nicolau.  Aaron Lucas singled and scored a run while Ethan Goforth and Jacob Nottingham both drew walks and would later steal home, resulting in critical runs.

Blacksburg picked up four more runs in the 4th.  Andrew Roberson got things going with a single and after a Grayson Shelton walk, stole home to push the score to 8-3.  Hughes added another RBI single, scoring Shelton. Nicalou responded with his third hit of the game, a double, to score Hughes, and Jack Madigan followed with a RBI single. Jake Verniel added his second double of the game, but was left on base.

Both Blacksburg and Montgomery County added a run in the 6th.  Nicolau reached base on a single and was driven in by a Verniel sacrifice.

Jacob Nottingham had the defensive play of the night in throwing out a runner at first on a hard hit single to RF.

Blacksburg advances to the next round @ 8pm on Tuesday @ Shelor Motor Mile Park. 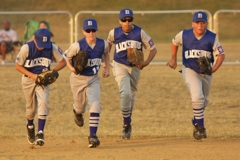 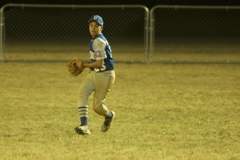 Jacob Nottingham guns a runner out 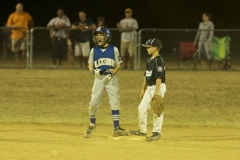 Hal Hughes is fired up! 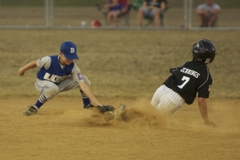 Hal Hughes puts the tag on 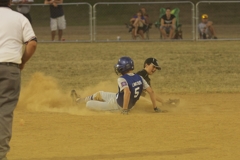 Adam Linkous safe at second base 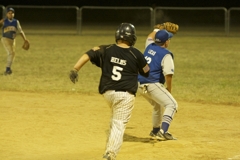 1B Aaron Lucas readies for a throw 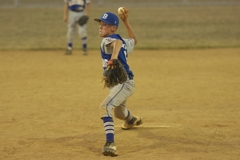 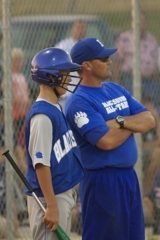