In the first game, Blacksburg faced the tournament host, Jefferson Forrest.  These teams are familiar with one another as the two have played verus each other in middle school baseball for many years.  The Bruins put a run on the board in the top of the 1st after Morgan McCoy reached on an error and then Jon Hinson reached on a fielder's choice.  Adam Linkous hit a RBI sacrifice fly to score Hinson to go up 1-0.

In the bottom half of the frame, Blacksburg starting pitcher, Tyler Davis, kept the Cavaliers scoreless.  Hinson gave up a single, but he runner was stranded.

The Bruins were kept scoreless in the top of the 2nd.  Jake Schirmer drew a walk, and Jake Verniel was HBP, but both were stranded.

Jefferson Forrest would tie the game in the bottom of the 2nd.  After an infield error allowed a Cavalier to reach base, the next batter was HBP.  A wild pitch advanced the runners on 2B and 3B each one base respectively.  The runner on 3B scored on a RBI sacrifice fly to tie the game.  After a 2nd out, another single put a 3rd runner on base for the inning, but McCoy got the last batter to fly out to end the inning and the Cavalier scoring threat.
Both teams were held scoreless in the 3rd inning as the pitching duel continued.

In the top of the 4th, the Bruin bats came alive, registering three hits and scoring three runs to extend their lead 4-1.  Tyler Davis led off the inning by drawing a walk and Jacob Sparrow was inserted as a courtesy runner for the pitcher.  After an out, Schirmer hit a single to left field, advancing Sparrow to 2B.  After anther out, Verniel hit an RBI single to right field, scoring Sparrow from 2B (2-1), and advancing Schrimer to 3B.  A Jefferson Forrest error in throwing home, allowed Schirmer to score (3-1) and Verniel to advance all the way to 3B.  McCoy then singled to score Verniel (4-1).  A fly out ended the inning for Blacksburg.

The Cavaliers came right back to score two runs of their own and to cut the lead to 4-3.  A lead off single and walk got thing started for Jefferson Forrest.  Then, a walk loaded the bases.  A RBI ground out scored a run (4-2) and advanced everyone one base.  After another walk, a Cavalier hit a RBI ground out to score another run (4-3).  Morgan McCoy was inserted to pitch and got the last out via a fly out.

Blacksburg tacked on one more run in the top of the 5th to extend their lead to 5-3.  With one out, Adam Linkous singled to center field.  Linkous then stole 2B and Davis singled to right field to drive in a run (5-3), scoring Linkous.  Jefferson Forrest brought in their Ace, Christian Bourne, who quickly stemmed the tide in recording two quick outs and ended the inning.

Davis retired the side in the bottom of the 5th in consecutive order with a strike and two ground outs.

Bourne continued his dominance the rest of the game, only allowing one Bruin to reach base, a single by Linkous in the top of the 7th.  However, it was too little too late for Jefferson Forrest, as McCoy was nearly just as effective and prevented the Cavaliers from scoring as well.  Jefferson Forrest hit a double in the bottom of the 6th, but the runner was stranded.  The Cavaliers also threatened in the bottom of the 7th when the lead off batter reached via an infield error and then a single put two runners on with no outs. However, McCoy retired the next three batters in order with two fly outs and fittingly, a strike out to end the game.

Blacksburg had six hits that produced five runs with three of them being earned.  Adam Linkous led Blacksburg offensively, going 2/3 with an RBI.  Morgan McCoy, Tyler Davis, Jake Schirmer, and Jake Verniel also had a hit.

Morgan McCoy and Tyler Davis combined to throw a five hitter, and allowed three runs, two of them earned. McCoy had three strikeouts.  Davis picked up the win and is now 3-0 on the season.
After the game, Head Coach Danny Shouse was pleased with the win, “This was a huge win for us on a very special day (April 16th anniversary).  It felt like a playoff atmosphere.  We really hit well, even though we only had six hits….We hit the ball hard and put it in play.  Jake Verniel and Tyler Davis both had huge hits. Except for a couple errors in the infield, we played very well defensively.  I was especially pleased with the outfield and how they played under the lights.  Not only was it our first game at night, but the way the lighting fixtures are laid out in that stadium, it can be a tough angle for an outfielder.  We are slowly getting better at pitching, but when we get tired, we are done….We’ve got to get better conditioned.  We are excited about going back to Jefferson Forrest and we’ll get on the bus at 3:30 and see what happens.”
In the second game of the tournament, Blacksburg faced Spotswood, who had defeated Liberty the day before.  After returning home well after midnight the night before, the Bruins had turn right around and head back to Jefferson Forrest.  As one would expect in a championship game, it was a pitcher’s duel, with only seven total hits in the game, and only two combined earned runs.
Senior Jon Hinson took the mound for Blacksburg and pitched his best game of the season thus far.  In the top of the 1st, Spotwood's lead off hitter reached via an error, but then Hinson retired the side in order to end the inning.
Blacksburg was retired in consecutive order in the bottom of the 1st, and then in the top of the 2nd, Hinson gave up just one hit, a single, and only faced four batters in the inning.
The Bruins jumped out to a lead in the bottom of the 2nd, taking advantage of Spotswood miscues.  Adam Linkous drew a lead off walk and then Tyler Davis singled to center field.  Jake Schirmer was hit by a pitch to load the bases with no outs.  After a strike out, Ben Anstrom put the first run on the board when he hit an RBI single, scoring Linkous.  A player was caught stealing home for the 2nd out of the inning, and then Jake Verniel reached on an infield error.  Instead of being the last out of the inning, the error allowed both Schirmer and Anstrom to score to put the Bruins up 3-0.  A fly out ended the inning.
Spotswood responded right back and scored a run of their own to cut the lead to 2-1.  With one out, a batter reached by drawing a walk.  A ground out recorded the 2nd out of the inning.  Another walk put two runners on base and then a single, scored a run for Spotswood.  The next batter singled and all of a sudden, the Trailblazers had bases loaded and the potential to tie the game, or even have a big inning.  However, Hinson struck out the next batter to end the scoring threat and the inning.
Both teams were held hitless in the 3rd, 4th, and 5th innings and the pitching duel between the two teams continued.
In the top of the 6th, Spotswood was able to draw a walk, but the runner was stranded.
In the bottom of the 6th, Davis led off with a walk, and then Jake Schirmer had the first hit of the game since the 2nd inning.  However, two strikeouts later, there were now two outs, and after Jake Verniel drew a walk, a ground out ended the inning.
Spotswood attempted to rally in the top of the 7th.  A lead off double got things going for the Trailblazers. But, Hinson promptly forced two ground outs for two quick outs, and the lead off runner advanced to 3B on one of the groundouts.  An infield error allowed a batter to reach base and the runner to score from 3B (3-2).  The runner was able to reach 2B on the error to set up the potential tying run in scoring position. However, Hinson struck out the next batter to end the game and secure the win for Blacksburg.
P Jon Hinson went the distance for Blacksburg, pitching all 7 innings.  He scattered four hits, gave up two runs, only one of which was earned. Hinson walked three and struck out four batters.
Offensively, Blacksburg scored three runs on three hits.  One run was earned.  Tyler Davis, Jake Schirmer, and Ben Anstrom each had a hit for the Bruins.  Anstrom had the lone RBI.
By winning the tournament, Blacksburg improves to 8-3 on the season.
Head Coach Danny Shouse was pleased with winning the mini tournament.  “Johnny Hinson won that game for us.  We need to hit better and we aren’t going to go very far unless we start to hit.  I will say that a lot of it may have been the long bus rides and in one case, only had 14 hours between when we got home and had to turn around and leave again….And the boys had to go to school.  Overall, we played well.  It was good to get a couple of road wins, our only ones since beating Giles (on the road).  The kids have a lot of heart and did what they had to do to win.  If I had to give it an overall grade, I’d say a B-."
Blacksburg travels to play country rival, Christiansburg on Tuesday April 22nd. 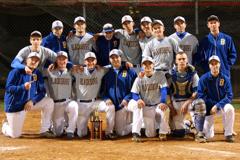 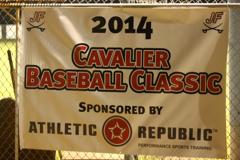 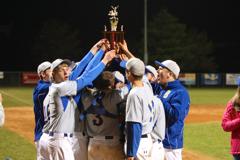