Blacksburg traveled to Roanoke, VA. on Tuesday to face River Ridge foe Cave Spring for it's first conference game of the year. In typical fashion, both teams fought hard in a back and forth battle till the very end of the game, with Cave Spring winning late, 5-4.  The Bruins were without fellow teammate, Jon Hinson, who was sick.

Blacksburg was slow out of the gate, going three up and three down in the top of the 1st inning.  However, the Knights picked up three runs in the bottom half of the frame to take an early 3-0 lead.  Two singles and then an infield error permitted a run to score.  After a walk, a two RBI single pushed two more runs across for Cave Spring. Blacksburg starting pitcher, Morgan McCoy, then retired the next three batters in order to end the inning.
Blacksburg's offensive woes continued through the top of the 2nd and 3rd innings, as they were held scoreless in both frames.  The only hit was by Adam Linkous, a single to right field in the 3rd inning.
McCoy settled in well and held Cave Spring scoreless in the 2nd and 3rd innings, facing just 8 batters, and allowing just one hit, a double.  Of the six outs he recorded, two were by strike out.
Blacksburg would rally in the top of the 4th with five hits, four being in consecutive order.  Jake Schirmer led off the inning with a double to center field, and then a Jake Verniel bunt single advanced Schirmer to 3B.  Ben Anstrom singled to left field, scoring Schirmer, and Verniel used his speed to advance to 3B.  Tyler Davis then singled to right field for the Bruins 4th straight hit, picking up an RBI by scoring Verniel and advancing Anstrom to 2B.  Grayson Shelton sacrificed Anstrom to 3B and advancing Davis to 2B.  Back at the top of the order, Morgan McCoy singled to right field, driving in Anstrom to tie the game at 3-3.  Adam LInkous drew a walk and then Ethan Goforth hit a sacrifice fly, scoring Davis and Blacksburg would take the lead 4-3.  The next batter struck out, ending the productive inning for the Bruins.
McCoy faced just four batters in the bottom of the 4th, giving up two singles, but then coming right back, forcing a line out, and doubling a player off 1st base.  A Cave Spring Knight was also caught stealing.
Neither team scored in the 5th.  Blacksburg went three up and three down, while Cave Spring sent just 5 batters to the plate. With two outs, the Knights drew a walk and then a single to right field put a runner in scoring positon at 2B, but McCoy struck out the next batter to end the inning and the scoring threat.
In the top of the 6th, Blacksburg went three up and three down yet again.
However, Cave Spring rallied in the bottom half of the frame.  With one out, the Knight singled to put the tying run on base.  The next Cave Spring batter hit into a fielder's choice and the Bruins did an excellent job of getting the lead runner out at 2B, and in doing so recorded the 2nd out of the inning.  A single to left field put runners on 1B and 2B and then a walk loaded the bases.  A infield error permitted the tying run to score from 3B, and extended the inning for the Knights.  Cave Spring took advantage of the situation, and the next batter singled, sending runner at 3B home to take the lead 5-4 and re-loaded the bases.  McCoy forced a fly out to end the inning and prevent a possible big inning by Cave Spring.
Unfortunately, Blacksburg could not score in the 7th, allowing Cave Spring to preserve a 5-4 win.  With two outs, Tyler Barry drew a walk and both Jake Schirmer and Jake Verniel reached via Cave Spring fielding errors, which loaded the bases for the Bruins.  However, the next batter grounded out to end the very close game.
Blacksburg scored 4 runs on 6 hits and had 2 errors in the field.  Cave Spring scored 5 runs on 10 hits and committed 2 errors as well.
Morgan McCoy went the distance for Blacksburg, giving up 10 hits, just 2 earned runs, walking 3, and striking out 6 batters.  Four of Cave Spring's five runs were earned.
Offensively, Blacksburg had six hits, with Morgan McCoy, Adam Linkous, Jake Schirmer, Jake Verniel, Ben Anstrom, and Tyler Davis each recording a hit.
Head Coach Danny Shouse said after the game "We will get better, and it starts with the Head Coach, the assistants, and the players.  We will start today!"
Blacksburg is now 4-2 on the season and faces ex- River Ridge foe Salem on Friday @ 4:30 pm in Blacksburg. 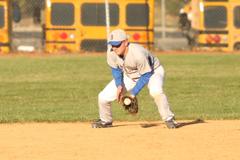 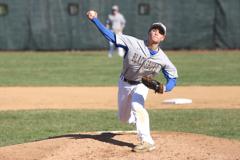 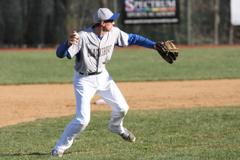 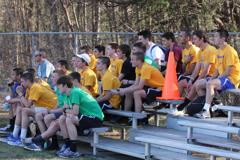 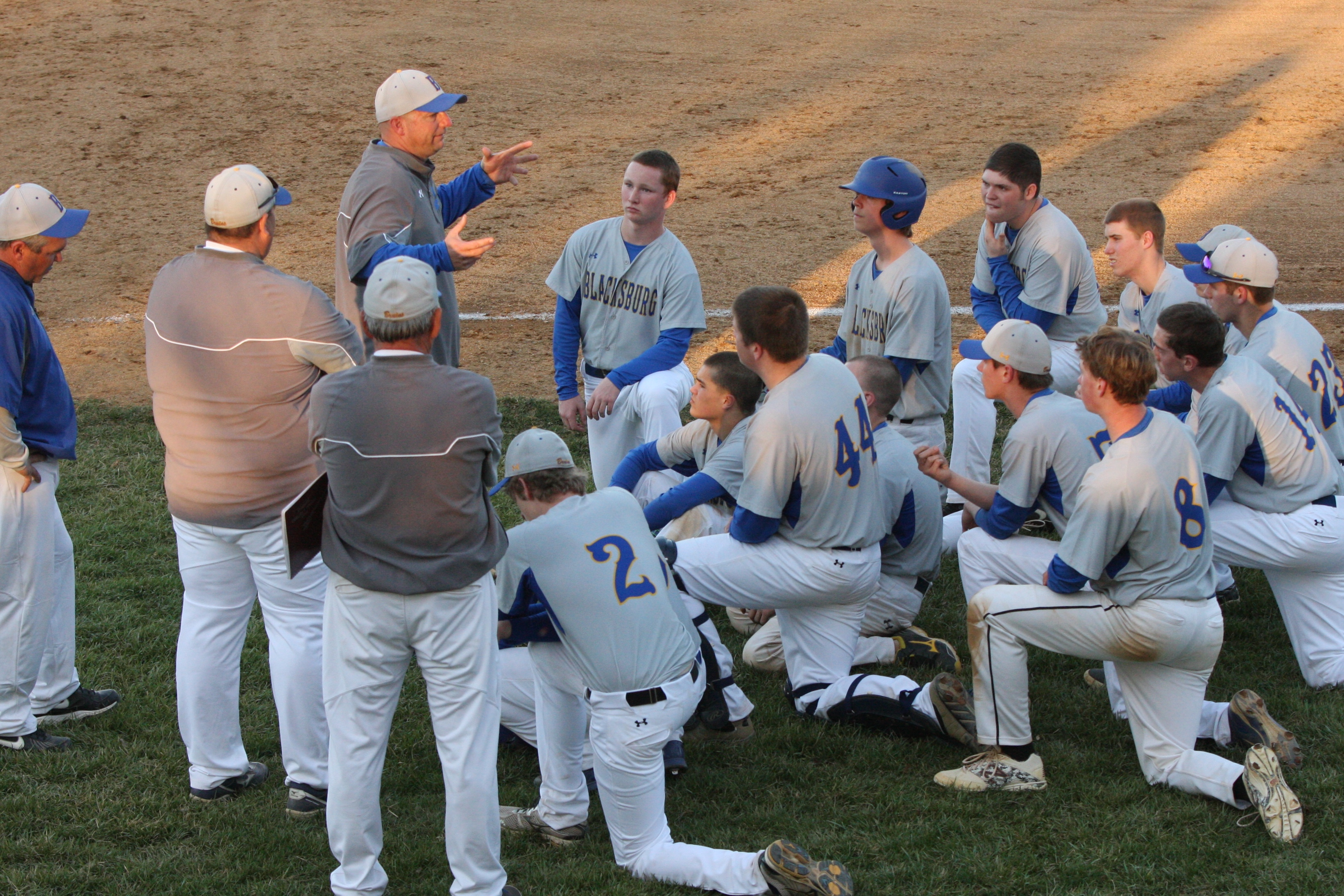 Head Coach Danny Shouse talks to his team after the game