Giles County, coached by former Virginia Tech Hall of Famer and Pittsburgh Pirate All-Star, Mike Williams, came to Blacksburg for a rematch with the Bruins from a game played earlier this season.  While the Spartans were more competitive this time, at least score wise, the outcome was still the same.  Giles was over matched by the Blacksburg in the 7-0 loss to the Bruins.

Blacksburg pitcher Tyler Davis was dominant for the Bruins, going the distance in pitching all 7 innings to record the win.  For the first three innings, he faced the minimum number of batters in each inning, retiring each one in order.   Blacksburg took the lead in the bottom of the 2nd, 1-0.  Tyler Barry led off with a double to left field.  He advanced to 3B on a balk, and then scored on an RBI sacrifice fly by Jake Verniel.  Morgan McCoy and Jon Hinson both drew walks but were stranded on a fly out to right field. In the bottom of the 3rd, Blacksburg busted the game open, scoring 4 more runs to extend their lead to 5-0.  Adam Linkous led off by drawing a walk.  Tyler Davis reached on an error and Grayson Shelton was inserted as a courtesy runner for Davis.  After an out, Shelton stole 2B and then Barry drew a walk.  Shelton advanced to 3B on a wild pitch.  Barry then stole 2B in a 1st and 3rd situation.  Caden Croy reached on an error, allowing Shelton and Barry to both score.  Verniel then singled to center field, advancing Croy to 2B.  McCoy doubled to left field, scoring Croy and advancing Verniel to 3B.  However, a ground out ended the inning, but not before the Bruins took a commanding 5-0 lead early in the contest. A Giles player finally reached base in the top of the 4th, with a single.  However, he was stranded as Davis recorded three ground outs. Neither team did much with their next at bat, as Blacksburg only sent 4 players to the plate, with Linkous singling, but getting stranded.  In the top of the 5th, Giles was retired in order by Davis yet again.

In the bottom of the 5th, Blacksburg scored two more runs to extend their lead to 7-0.  Barry led off the inning with a triple.  Caden Croy's ground out RBI scored Barry from 3B.  Verniel then singled to RF to get on base.  McCoy reached on a fielder's choice, forcing Verniel out a 2B.  Jon Hinson singled to right field, advancing McCoy to 3B. Ethan Goforth then singled on a hard ground ball, scoring McCoy.  The Giles defense recorded the last out throwing a Bruin player out on the bases.

In the top of the 6th, Davis retired the first two batters with a ground out and strike out.  A Spartan reached by error, and then Giles recorded their 2nd hit of the game with a single to center field.  Davis came right back and got the next player out by strike out, ending any possible scoring opportunity.

In the bottom of the 6th, Blacksburg was retired in order for the first time in the game.
In the top of the 7th, Davis shut the Spartans down for good.  Facing just 5 batters, Davis forced two ground outs and a fly out to end the game.  Two player did reach base after getting hit by a pitch.  Davis and his defense didn’t allow a Giles player to advance past 2B.
With the win, Blacksburg improves to 4-1 on the season.  Tyler Davis pitched all 7 innings for the Bruins, scattering just two hits, striking out 6 batters, and remarkably, not permitting a walk.  Davis is 2-0 on the season for the Bruins.
Offensively, the Bruins were led by Tyler Barry with a triple and a single.  Jon Hinson and Jake Verniel each had two singles.  Morgan McCoy had 2 RBIs and Barry scored 3 runs.  Blacksburg scored 7 runs on 9 hits and had 3 K’s. Blacksburg dramatically dropped their errors by just committing one in the field.
Head Coach Danny Shouse was pleased with the win, but was firm about his expectations moving forward.  “We’re still not hitting the ball like the way we should.  I’m an upfront guy and if it walks like a duck, sounds like a duck, it’s a duck.  We’ve got to hit better.  In fact, if we hit the rest of this week like we did tonight, we will get beat.  We need to stop trying to hit the ball to the opposite field.  We are a pulling team and need to pull the ball.  I made some changes in the infield that I think will help things and our defense was a lot tighter today.  We’ll see how it plays out.  Our guys played hard and we are 4-1.  No runs have been scored on us at home this year, which is impressive.  I think we have a really good team.”
Blacksburg plays @ Cave Spring on Tuesday for it’s first conference game of the year, and then hosts Salem on Friday. 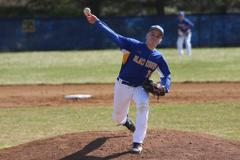 Davis Dominates the Spartans, going 2-0 on the season 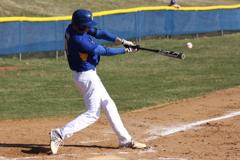 Tyler Barry rips one of his two hits 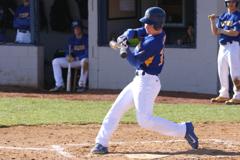 Jake Verniel with one of his two hits