First Ever Regular Season Match-Up Between the Two Teams

The Blacksburg Varsity played it's home opener on Friday, hosting the Beavers from Bluefield.  This was the first regular season meeting ever between the two schools.  Blacksburg's pitchers, Tyler Davis, Morgan McCoy, and Jake Verniel held Bluefield to just 3 hits, while the bats stayed hot for Blacksburg, pounding out 13 hits and scoring 9 runs to win 9-0. Starting pitcher, Tyler Davis, was highly effective, facing just 5 batters in the top of the 1st.  He surrendered one walk, forced three ground balls, and a player reached by an infield error.   In the bottom of the 1st inning, Morgan McCoy led off with a lead off walk.  After an out, Ethan Goforth hustled and beat out a dropped third strike out. Tyler Barry then singled to left field.  After a fly out, Jake Schirmer hit an two RBI single to left field, scoring Goforth and Barry. Davis then singled through the infield.  However, a strike out ended the inning.  At the end of the 1st inning, Blacksburg led 3-0. In the top of the 2nd, Davis worked well out of a jam.  He gave up a lead off single to left field, and then an infield error, putting two men on with no outs. However, Davis was effective working his way through the situation, striking out two consecutive players.  A walk loaded the bases, but then Davis forced a ground out to end the inning and the scoring threat.   Blacksburg did not score in the bottom half of the frame, stranding Morgan McCoy who had singled to center field and Ethan Goforth, who had drawn a walk.   Davis faced just 4 batters in the top of the 3rd, striking out two and picking off a runner who he had walked. In the bottom of the 3rd, Blacksburg tacked on 4 more runs to extend their lead to 7-0.  With one out, Jack Madigan singled and then Jake Schirmer reached on an error, scoring Madigan.  Schirmer advanced all the way to 3B on the Bluefield error.  Davis sacrificed, scoring Schirmer from 3B, and then Grayson Shelton drew a walk.   Jake Verniel reached on an bunt error, which advanced Shelton to 2B.  With runners on 1st and 2nd base, McCoy then hit an RBI single, scoring Shelton and advancing Verniel to 3B.  Jon Hinson then singled to right field, scoring Verniel.  A fly out ended the inning. Davis got the lead off batter to fly out to start the 4th inning, and then a single put a runner on 1B.  Davis struck out the next batter and walked the next, resulting in Bluefield having two runners on base.  Back at the top of the order, Blacksburg elected to change pitching so Bluefield wouldn't get a third look at Blacksburg's pitching.  The strategy worked effectively as Jake Verniel got the lead off hitter to fly out to end the inning and the scoring threat.   Blacksburg went three up and three down in the bottom half of the frame.  At the end of 4 complete innings, Blacksburg led 7-0. In the top of the 5th, Verniel was perfect.  He held Bluefield to 3 up and 3 down, forcing two ground balls and recording a strikeout.  He retired the first two batters with just 3 pitches. In the bottom half of the inning, Blacksburg's offense continued to pound out hits, putting two more runs on the board to extend their lead to 9-0. Caden Croy led off with a single to right field.  After a strike out, Verniel, singled to center field, advancing Croy to 2B.  A ground out advanced each of the runners one base, to 3B and 2B respectively.  Jon Hinson then delivered a two RBI single to center field, scoring both Croy and Verniel.  Ethan Goforth drew a walk, but then a runner was caught stealing to end the inning.

Verniel continued to pitch in the top of the 6th, facing just four batters.  After two quick strike outs, Bluefield singled to put a runner on, but Verniel quickly ended the inning with another strikeout.  A dropped third strike was alertly played by C Goforth to first baseman, Croy.
In the bottom half of the 6th, Tyler Barry walked and Caden Croy hit a single to center field, but both were left stranded.
Morgan McCoy was inserted to pitch in the top of the 7th to close the door on the Beavers.  He retired the players in order, with a ground out and two strike outs.
Blacksburg scored 9 runs on 12 hits, while Blacksburg pitchers shut Bluefield out, and held them to held just 3 hits.
Starter Tyler Davis pitched 3 & 2/3 innings, giving up just two hits and striking out 5 Bluefield batters.  Middle reliever Jake Verniel pitched 2 & 1/3 innings, giving up just one hit and striking out 4 batters in his first high school appearance on the mound.  Closer, Morgan McCoy, pitched the final inning, and did not allow a baserunner, throwing just 8 pitches. Davis got the win for Blacksburg.
Offensively, Blacksburg was led by Morgan McCoy, Jon Hinson, Tyler Barry, and Caden Croy who each had 2 hits. Jake Verniel scored 2 runs and Jake Schirmer had 2 RBIs.
After the game, Blacksburg Head Coach Danny Shouse said “We hit the ball really well.  I think we're getting better every game now.  we executed plays that needed to be played, manufactured runs and did well overall.  We need to get tougher on the mound, mentally.  That's just being straight forward.  Our pitching was impressive though as we struck out 10.  Overall, a very productive day.  A true test will be Monday and we need to be ready to play.
With the win, Blacksburg improves to 2-0 on the season and hosts Patrick Henry next week.
NOTE: Tuesday’s game vs Patrick Henry has been moved to Monday due to pending inclement weather. 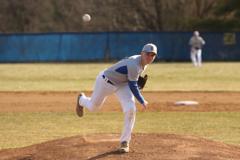 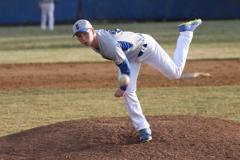 Middle Reliever Jake Verniel in his First Ever HS Game 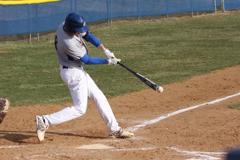 Tyler Barry Gets One of His Two Hits 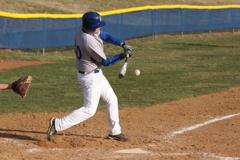 Caden Croy With One of His Two Hits 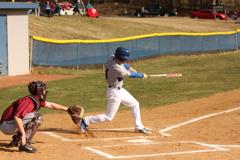 Jon Hinson Rips One of His Two Hits