Blacksburg got it's 2014 season off to an incredible start with a 23-9 thrashing of the Giles Spartans. Giles smaller field was a launch pad for the hot hitting Burins and they wasted little time getting started, scoring 5 runs in the top of the 1st inning, all with two outs.  Tyler Barry homered with Ethan Goforth on base to put Blacksburg up 2-0 and then Jack Madigan hit a single and Jake Schirmer drew a walk to put two runners on base.  Tyler Davis then hit an RBI double to left centr field, scoring both Dylan Surface, who was inserted as courtesy runner for Madigan, and Jake Schirmer.  Ben Anstrom then reached via an error, permitting Davis to score.  A strike out ended the inning, but not before the Bruins pushed 5 runs across for a quick 5-0 lead. Giles picked up two runs in the bottom of the 2nd on three singles and an error to pull within three runs 5-2. Giles pitching settled in and held Blacksburg scoreless in the top of the 2nd, while they picked up 2 more runs of their own on three more hits and an error in the bottom half of the frame to notch the score at 5-4. In the top of the 3rd, Blacksburg failed to score, despite a lead off single by Blacksburg's starting pitcher, Jack Madigan.  In the bottom half of the inning, Madigan retired Giles in order, three up and three down, recording three ground outs in just seven pitches. In the top of the of 4th, the Bruins busted the game open, scoring 11 runs in the inning.  With one out, Blacksburg went to work with McCoy singling to get things started.  Jon Hinson then singled, followed by a Ethan Goforth single to load the bases.  Tyler Barry homered to LF, hitting a grand slam and scoring  4 runs to expand the Bruins lead to 9-4.  Madigan kept the rally going, singling to LF, followed by Schirmer singling, advancing Madigan to 2B.  Davis reached via an error, loading the bases once again.  Anstrom then reached on a fielder's choice (FC), scoring Surface, who was inserted as a courtesy runner for the pitcher, Madigan.  Jake Verniel was HBP, re-loading the bases yet again.  Morgan McCoy then hit the 2nd Blacksburg grand slam of the game, blowing the game open to 14-4.  Hinson reached base on a dropped 3rd strike and Goforth reached via an error.  Tyler Barry then hit a hard two RBI double to RF, scoring two more runs, 16-4.  A strike out ended the inning.   Dylan Surface was inserted to pitch for Blacksburg in the bottom of the 4th.  Surface kept Giles scoreless, facing 5 batters, giving up no hits, while two batters reached via Blacksburg fielding errors.   In the top of the 5th, the Bruins picked up right where they left off, scoring 7 runs in the inning.  With one out, Tyler Davis singled to CF.  After Anstrom reached via an error, Jake Verniel hit a single to load the bases for the 5th time in the game.  Back at the top of the order, Morgan McCoy hit his second grand slam of the game, scoring 4 more runs and extending the lead to 20-4.  Two back-to-back singles by Hinson and Goforth set up Tyler Barry to hit his 3rd home run of the game, a three run shot  to LF to make the score 23-4.  Two outs sandwiched between a Schirmer hit, ended the inning at 23-4. Giles finally got their offense going again, scoring 5 runs in the bottom of the 5th inning.  With two outs and a runner on 2B in scoring position, Everett Vick came into pitch and got the last out of the inning via strikeout, to end the game via slaughter rule. Blacksburg scored 23 runs on 22 hits, and made 4 errors in the field.  Giles scored 9 runs on 9 hits and also had 4 fielding errors.   Offensively, Blacksburg was led my Morgan McCoy, who had two grand slam home runs and 8 RBIs.  Tyler Barry had three home runs and 11 RBIs.  Blacksburg Baseball does not keep individual game records, but both players are off to an excellent start in possibly breaking the single season RBI record, 34 held by Joey Phillips in 2008 when the team went deep into the state playoffs.   Starting pitcher Jack Madigan got the win for Blacksburg, pitching 3 complete innings.  He allowed just two earned runs on six hits and struck out two Giles batters. Blacksburg Head Coach, Danny Shouse, was very pleased with how his Bruins played and started the season.  "We really hit the ball well, played well overall, and everyone got to play," said Shouse.  Coach  Shouse, however, was not happy that his team was not listed in the Timesland top 10.  "How are we not in the top 10 of the Timesland?  I just don't understand."  Coach Shouse added, "I'll be honest...This has really upset me and my team and got them fired up and we are out to make a statement.  We are a better team than last year for sure.  I couldn't ask for a better opening day and now we have to focus on Bluefield, which no one knows anything about them." The Blacksburg Bruins face Bluefield on Friday, March 21st at 4:30pm at Old Blacksburg HS. 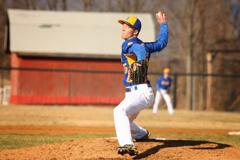 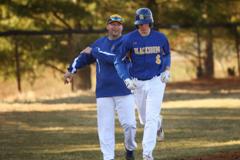 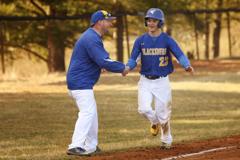