In the nightcap of the second semi-final game, Pulaski East eliminated Patrick County 8-3 in a game that was much closer than the score indicated.

Nathaniel Remington was the starting pitcher for Pulaski and promptly retired the Patrick Co. side, facing just four batters.

in the bottom of the 1st, Pulaski scored a run to pull ahead 1-0.  Lead off hitter Jordan Lytton led off by drawing a walk and then stole 2B.  He advanced on a throwing error, and scored on a RBI fielder's choice by Alex Akers.  Nathaniel Remington reached with a single, but was stranded.

Neither Patrick County or Pulaski East would score in the 2nd inning due to good pitching and solid defense.  After two complete innings, Pulaski would lead 1-0.

In the top of the 3rd, Patrick Co. would score a run to tie the game at 1-1.  Tanner Epperson led of by drawing a walk, and then stole both 2B and 3B.  Wesley Hudson also drew a walk and in a 1st and 3rd situation, Hudson stole 2B.  After two strike outs, Patrick's lead off hitter Kristian Ashburn hit a RBI single to score Epperson.

Pulaski promply responded by scoring three runs in the bottom of the 3rd.  Alex Dalton led off the inning with a walk, and advanced to 2B on a passed ball, and then stole 3B.  After an out, lead off hitter Brandon Lytton drew a walk.  With a 1st and 3rd situation, Lytton stole 2B to put runners and 2B and 3B.  After a second out, Trent Blankenship hit a 2 RBI triple, scoring Dalton and Lytton.  Nathaniel Remington then hit a single to score Blankenship.  A 3rd out stranded Remington. After three complete innings, Pulaski East would lead 4-1.

Patrick County failed to score in the top of the 4th, while Pulaski added a run to push the score to 5-1.  Zach Barker led off the inning with a double and moved to 3B on a ground ball out.   With one out, Braden Blevins hit an RBI single to score Barker.  Drew Mabry followed with a single, but the threat was ended on a very nice double play by Patrick County.

In the top of the 5th, Patrick County made things very interesting.  Thatcher Blankenship led off by drawing a walk.  Jared Brown also drew a walk, but Blankenship was thrown out at third attempting to steal on a throw by Pulaski, recording it's first out of the inning.  Brown moved to 2B on the play.  Tanner Epperson then hit a RBI single, scoring Brown.  Epperson then stole 2B.  After an out, Hunter Lawless reached via an error.  With two outs, Dylan Phillips hit a RBI single, scoring Epperson to make the score 5-3.  With runners on 1st and 3rd, the Patrick County threat was ended when Pulaski's Alex Akers struck out Patrick's clean up hitter.

In the bottom of the 5th, Pulaski broke the game open by scoring three runs on 3 hits and 2 errors.  Alex Akers led off the inning with a single, but was forced out on a FC by Trent Blankenship.  Blankenship stole 2B and then scored on an RBI single by Nathaniel Remington.  Jaden Frazier then hit a single and advanced on a error.  Alex Dalton then reached on a error and Frazier scored on the play.  The next batter was retired for the 3rd out.  After 5 complete innings, Pulaski East led 8-3.

Patrick County failed to rally in the top of the 6th as Alex Akers got Patrick to go three up and three down to end the game.

With the win, Pulaski East advances to play Blacksburg for the District 3 O-Zone Championship @ 11am on Wednesday @ the JC Field in Blacksburg. 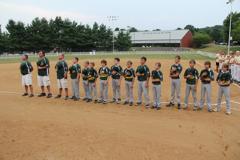 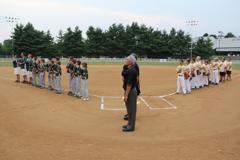 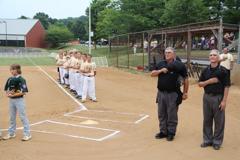