Bruins pound out 9 hits with solid pitching and defense

In the first semi-final game of the night, Blacksburg beat Christiansburg 7-2 to eliminate the Demons from the Dixie District 3 Tournament.

Jared Wulbrun would start the game for Blacksburg, only facing 4 batters in the first inning.  Defensively, Blacksburg had a nice double play to end the inning.

In the bottom of the first, Blacksburg got off to a quick start by scoring 4 runs.  Jared Madigan led off the inning with a single, but was put out on a FC at 2B.  After two outs, the Bruins got things rolling when Cole Epperely hit a RBI single, scoring Nathan Stern, who reached on a FC.  Jared Wulbrun drew a walk, and then Grant Johnston hit a 2 RBI single.  Craig Weaver followed with a RBI double and Davis Roberson also hit a double.  Both Weaver and Roberson were stranded to end the inning.  After one complete inning, Blacksburg led 4-0.

Great pitching and good defense by both Christiansburg and Blacksburg would lead to scoreless innings in the 2nd and 3rd innings.

In the top of the 4th, Christiansburg would score two runs, to cut the lead to 4-2.  Hunter Davis led off with a single, followed by a RBI double by Kyle Johnson.  After an out, Zach Taft had a single, followed by a single by Ryan McFee.  Shawn Buchner then drew a walk.  Taft scored on a WP, but McFee and Buchner were stranded on base to end the Christiansburg threat.

Blacksburg quickly responded, picking up 3 runs in the bottom half of the 4th to extend their lead to 7-2.  Jared Wulbrun led off with a deep single.  Grant Johnston singled to advance Wulbrun to 3B.  Johnston then stole 2B on a 1st and 3B situation, and scored on Craig Weaver's RBI fielder's choice.  After an out, Dom Hughes drew a walk.  Jared Madigan then hit another single, advancing Hughes to 3B and then stole 2B in a 1st and 3rd situation.  Nathan Stern had an RBI single, scoring Hughes.  Stern and Madigan would both be stranded after a third out. After 4 complete innings, the Bruins led 7-2.

Christiansburg and Blacksburg both went three up and three down in the 5th inning.

In the top of the 6th, Kyle Johnson led off with a walk.  William Stoudt reached on a FC, resulting in Johnson getting out. After two WPs, Stoudt scored on a passed ball to make the score 7-3.  The game ended with two consecutive strike outs of the 5th and 6th hole batters.

Blacksburg's Jared Wulbrun got the win, pitching the first three innings, and allowing just two hits, and striking out two. Nathan Stern pitched in relief, and after settling down following the 4th inning, he retired the side in the 5th, only giving up one hit in the 6th.  He struck out the last two batters to end the game.

Offfensively, Blacksburg was led by Grant Johnston who had two singles and two RBIs.  Jared Madigan also had two singles. Craig Weaver had a double and 2 RBIs while Davis Roberson and Chris Wyscoki each doubled.  Tiquest Terry and Cole Epperley both had singles and Epperley added an RBI.

With the win, Blacksburg advances to the Championship game to face Pulaski East @ 11 am on Wednesday, July 4th @ the JC Field in Blacksburg, VA. 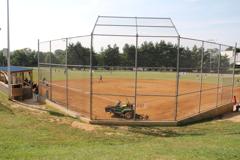 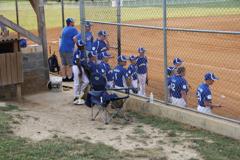 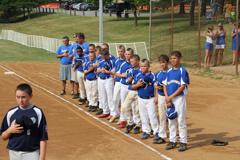