BHS jumped out to a 4-0 lead in the bottom of the first.  John Hamborsky reached on a two base error error to lead off the inning.  John Hinson reached on an infield hit .  Ben Fraley singled scoring Hamborsky and Hinson moved to third.  Tyler Barry plated Hinson with a sacrifice fly to center to make the score 2-0.  Casey Herman reached on a fielder’s choice and later stole 2nd.  Herman scored on Thomas Hughes’ double and Hughes later scored on a two out single by Colin Ball to make the score 4-0.

Patrick Henry scored single runs in the 3rd, 5th, and 6th to close the gap to 4-3.  The Bruins broke open the game with a 4 run 6th.  Colin Ball singled and moved to 3rd when Alex Wong’s sacrifice bunt was thrown away and he moved to 2nd.  John Hamborsky was intentionally walked to load the bases with no outs.  John Hinson singled scoring Ball to make the score 5-3.    With one out Tyler Barry delivered a two rbi single scoring wong and Hamborsky  to make the score 7-3.  Blacksburg tacked on another run on an infield error to push the score to 8-3.

Ben Fraley had a complete game victory scattering 8 hits, striking out 6, and allowing 2 earned runs.  The Bruin offense was led by Tyler Barry with 3 rbi’s and John Hinson, Ben Fraley, Thomas Hughes, and Colin Ball had 2 hits each.

“Patrick Henry is the best hitting team we have seen," said Head Coach Jim Shockley.  They have played everyone tough.  It was a good win for our guys.  It was good to see us break it open after PH had closed to 4-3 in the top of the 6th.” 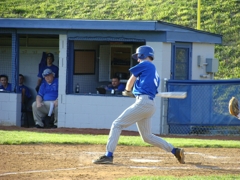 Colin Ball gets one of his two hits in the game 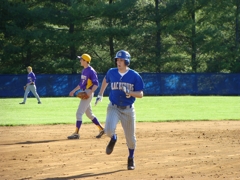 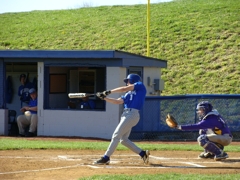 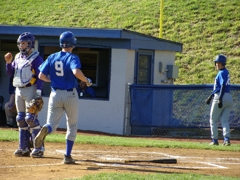 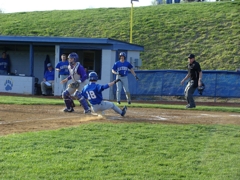 John Hinson scores on an IF error 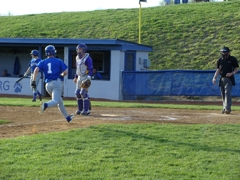