Bruins one out away from winning

Blacksburg jumped out to an early lead over Lord Botetourt, but the Cavaliers would rally to outlast the Bruins 8-4.

BHS jumped out to a 4-0 lead in the bottom of the 1st inning.  John Hinson reached on an error and scored on a 2 run homer by Ben Fraley.  Tyler Barry followed with a single and Casey Herman walked.  Thomas Hughes singled to load the bases.  Barry scored on a balk and Herman scored on a sacrifice fly by Alex Shimozono.

Ben Fraley shut down the Cavaliers and held them scoreless until the 6th.  Zack Kelly singled for LB’s first hit of the game, moved to second on an errant pickoff throw to first and scored on Will Cline’s double.  Cline later scored on a sac fly by Landon Ward to cut the Bruin lead to 4-2.  Fraley left the mound after 6 innings allowing 3 hits and 1 earned run while striking out 6.

In the top of the 7th with one out Connor Bronson walked, stole second, and moved to 3rd on Zach Maust’s grounder to 2nd.  Bronson scored on a wild pitch to cut the lead to 4-3.  Dylan Powers walked and stole second and scored on a 2 out double by Will Cline to tie the score at 4-4.  BHS failed to score in the bottom of the 7th and neither team scored in the 8th.

Botetourt broke the game open in the 9th with 4 runs with the key hit being an rbi double by Dylan Powers to give LB the lead.

Zack Kelly had 2 hits for LB and Thomas Hughes had two hits for BHS.

Coach Jim Shockley said, “ Heartbreaking loss for us today.  We were one pitch away twice and could not seal the deal.  We started off strong with 4 in the first but have to tack some runs on and too many walks hurt us.  Ben pitched great but it got away from us at the end.  This is a young but tough group and they will bounce back.  Have to give LB some credit.  They got some big time clutch hits late in the game today. 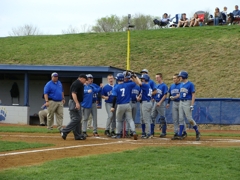 Ben Fraley is greeted @ home after a first inning HR 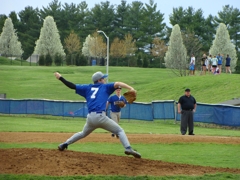 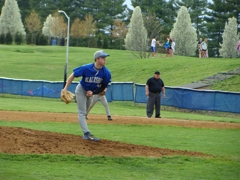